I read an article about Japan which said that Japanese people don’t have enough sleep compared with other countries.

OECD statistics, in its 2019 Gender Data Portal, reveal that Japan has the shortest average sleep in the world at 442 minutes per day a year — approximately 7.3 hours a night.

When I was living in Japan, some of my English teachers were surprised that lots of people sleep on trains in Japan. I was surprised that they said that it was not always the case in other countries. Now that I have been out of Japan for more than ten years, I can understand what they meant.

No matter whether they are seated or even standing, sleeping people in trains is typical scenery in Japan. Even when they are standing? — Yes, they do. If you go to the Tokyo station during the morning rush hour, you can understand what I mean.

At the busiest time, the station workers on platforms have to push the passengers to get them in the train. The trains are fully packed with commuters. I think the train at the rush hour in Tokyo is one of the most densely populated places in the world.

After the train leaves the station, people are standing between other people, and it is almost impossible to move. They are leaning against each other, sandwiched and squeezed in. No wonder that lots of them sleep while they are standing in trains. 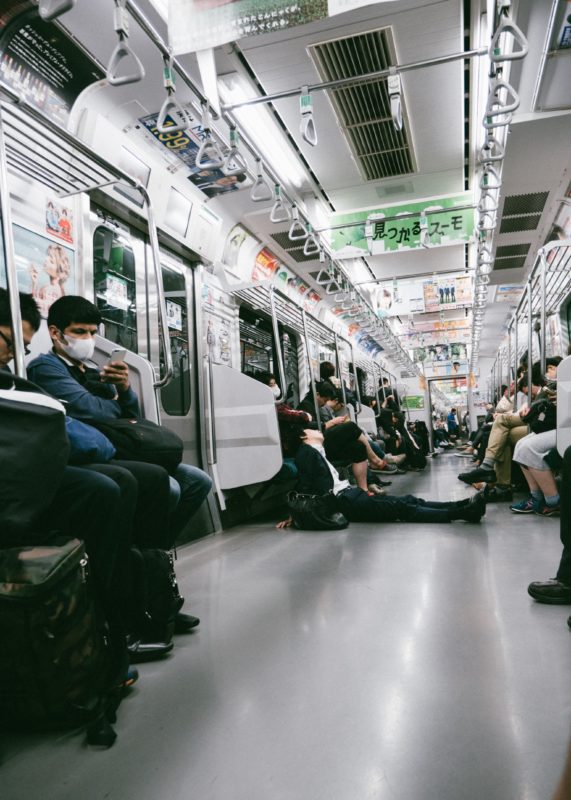 I did sleep in trains when I was in Japan. It is so comfortable to sleep that some people miss their station while they are sleeping. I had an experience that I was almost missing my station “Wakayama,” my hometown which is about one hour by train from Osaka.

One of my friends had a funny experience. She got on the train at Osaka station on the way back to Wakayama. The train was supposed to depart in a few minutes. She was seated on a cosy couch in the train and had fallen asleep before the train left the platform.

She was completely unconscious for a while. Suddenly, she awoke and jumped up from the seat. She didn’t know how long she had slept, but she thought that she had missed her station — “Wakayama.”

She looked around to figure out where she was, and she was calmed down because the train still was at the same platform in Osaka station. “Oh my goodness, the train has not left yet,” she thought.

However, when she looked at her watch, she couldn’t believe it, because two hours had already passed since she had gotten on the train. The train carrying my friend who was sleeping like a log had gone to Wakayama once and came back to Osaka station afterwords.

Commuting trains are not the best place to sleep, but it is so comfortable to sleep there. I even feel that it is impossible to wipe out my drowsiness on trains. I think there are a few reasons why people can sleep so easily on trains in Japan:

People work very hard in Japan and many of them even overwork. That’s why people are always exhausted. They should change their working style and sleep more (in bed). Besides that, I hope that the trains in Japan will keep their safety and cosiness.

What does ‘Daijoubuだいじょうぶ’ mean? — Pronunciation and How to Use it

What does ‘Kawaii’ mean?— its pronunciation and how to use

Travelling in Japan is not expensive.
What picture would you draw in the Japan’s new era
The Reason for Wanting to Marry a High-Grade Man
Is it easy to be a politician in Japan?
Hong Kong Trip with my Mother from Japan
3 Reasons why I do NOT think Japanese Food is Healthy
Are things Expensive in Japan?
A review of Fizz: Unlimited Internet in Montreal, Canada
I published another book in English: Weird Thoughts about Creativity
Do you know Emoji is originally Japanese? – There is also “Kaomoji” in Japanese writings
Subscribe