Rice congee is a simple meal. It is boiled rice cooked in lots of water for a long time, just until the rice breaks down in fact. It is one of the most basic and popular dishes in Asian countries, and a classic breakfast in China. 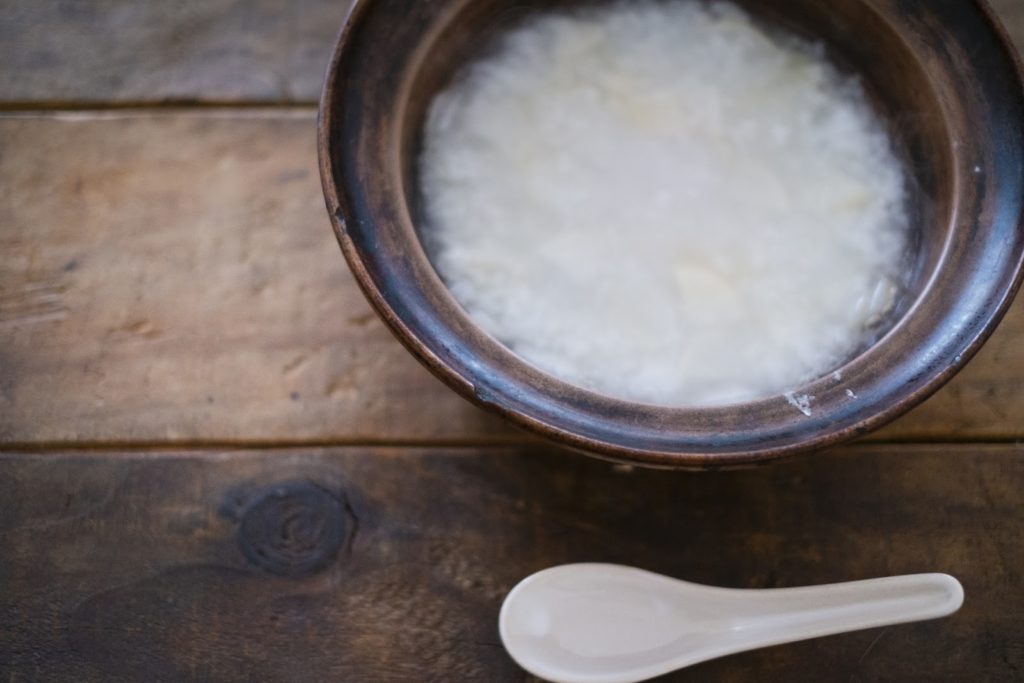 Apparently, it has been eaten for thousands of years in China, though the recipe of congee is different from region to region. Generally speaking, ingredients in South China are more varied than in the North, where it has been climatically easier to get a wider variety of food. 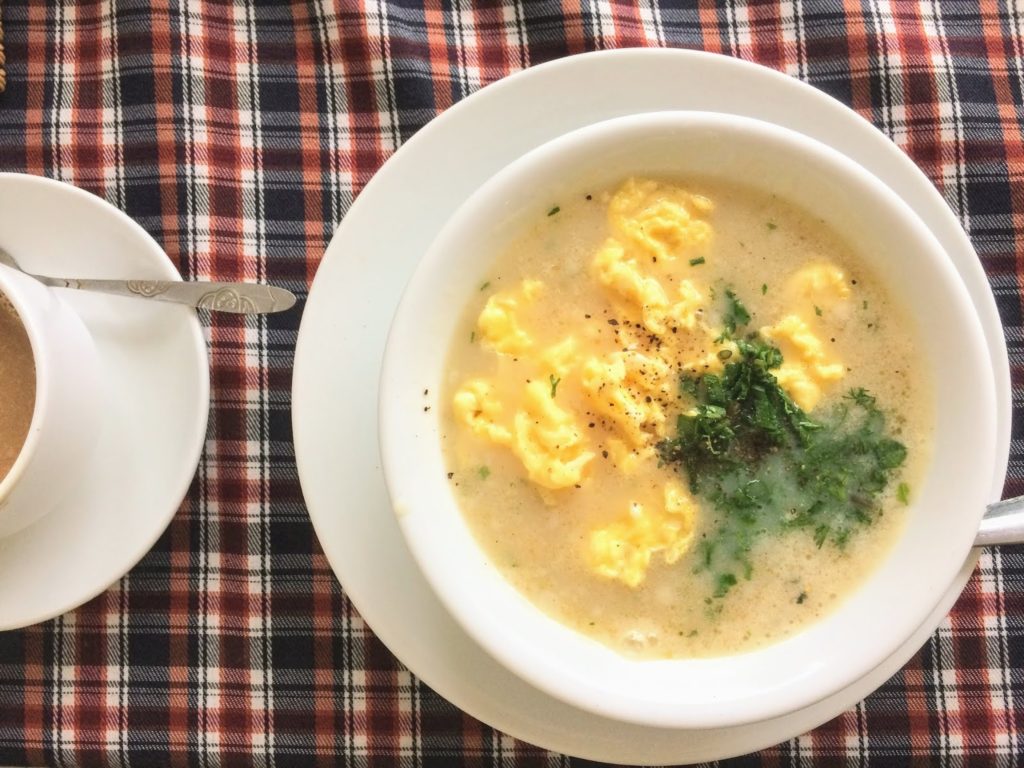 At a congee shop in a Cantonese area, you can easily find a bowl of congee cooked in chicken broth, topped with slices of meat (chicken or pork, most of the time), steamed vegetable, cut spring onions and coriander. It is also available in most of the Dim Sum shops in China Towns in many countries, called “饮茶 or 飲茶 (yam-cha) ” in Chinese. My favourite is “皮蛋瘦肉粥 (pí dàn shòuròu zhōu)”, rice congee with sliced pork and small pieces of ‘century eggs’.

In the northern part of China, simple congee is more popular, called “白粥 (bái zhōu, literally meaning ‘white congee’)” or “稀飯 (xī fàn, meaning ‘thin rice’)”. It is just boiled rice in a large amount of water, nothing more than that. You can optionally put additional ingredients, such as spring onions, chilli sauce, salty eggs, or Chinese doughnuts called “油条 (yóutiáo)” which is deep-fried dough. In my mind, a typical picture of a Chinese breakfast is where people are dipping Chinese doughnuts into their bowls of rice congee next to a steaming white stockpot.

In Japan, rice congee is the food when you are sick because it is easy to digest. Rice congee can not only warm up your stomach and body, but it is also nutritionally well-balanced. It is also common to cook it with eggs, or salmon flakes. In the winter, Japanese hot pot is a very popular dish. We share a big pot of chicken or pork broth on the table containing different ingredients; meat, fish, vegetables, any kinds of food that you like. At the end of enjoying the hot pot meal, we like to put rice (sometimes noodles) in the soup. The broth with other ingredients extract makes the rice congee even more delicious. 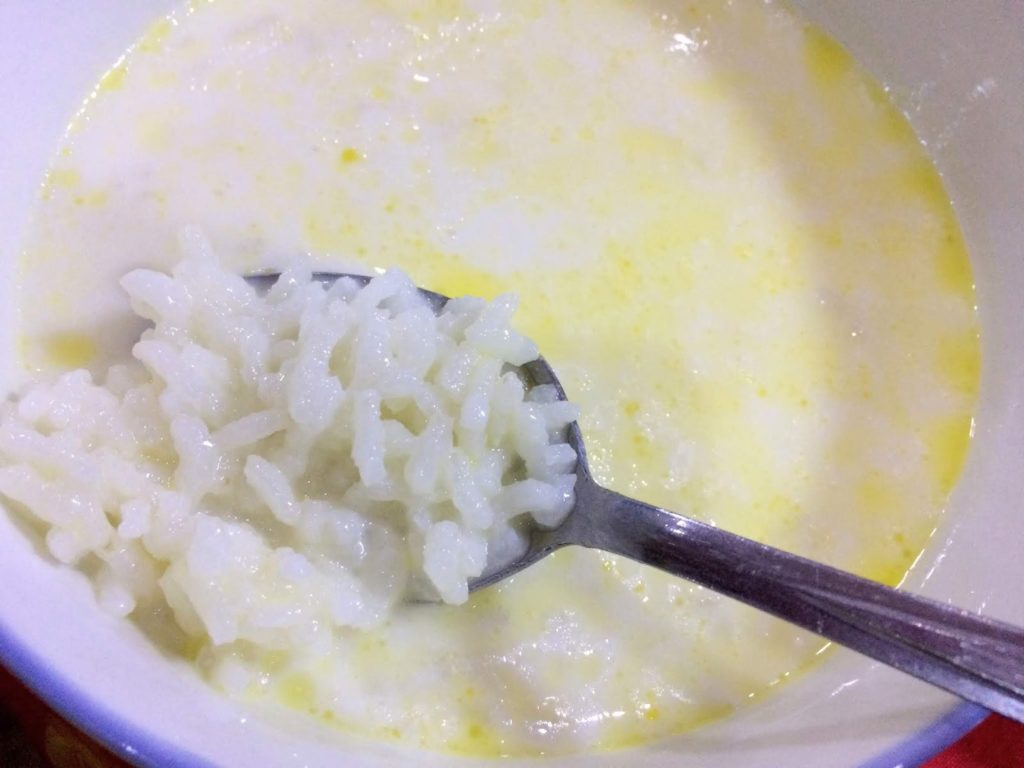 Making congee is very easy. You just put some rice with lots of water in a saucepan and boil it. After the water is boiled, turn down the heat, simmer it until the rice breaks down. You can add a pinch of salt in it when you are cooking, or you can put some soy sauce in your bowl of congee after it’s served.

I like rice congee with eggs. When the congee is almost cooked, I add beaten eggs in the saucepan, and take the pot off the fire, put the lid on it and leave it for a couple of minutes so that eggs will be cooked gently, never overcooked.

Additionally, you can have slices or minced chicken, pork or beef in it. I sometimes put tuna or salmon flakes, pieces of carrots, radish, sweet potato in the pot and boil them together. There are more options; the drops of sesame oil make it more Chinese, fish sauce brings Thai flavour, Gochujang (Korean red chilli paste) is also recommended. If you want sophisticated Japanese style, you can make rice congee thicker, put it in a bowl first, and pour Japanese “Dashi” broth (made of bonito and kelp) as a layer on it. After you sink some slices of “Sashimi (raw fish)” in the Dashi broth which is going to be half-cooked in the warm soup, drop sesame oil and toss it with spring onions at the end, it will be something more than special.

I often make congee for breakfast. It is good for your stomach in the morning, especially after the weekend party. It is nice to listen to the rice being cooked and to smell it, knowing you can have delicious food after these healing minutes.

How do you say “What is this?” in Japanese?

Chopsticks vs. Knives and Forks

I had an Abortion in Quebec, Canada — the Difference from Japan
Ideal Self and Real Self
How can we live after we lose the fear of death? — Love and Creativity
An Individual Box – writing prompt: A Box
When a poet gets transformed into a beast
Solitude
Writing Addiction and Writer’s high
Writing poems may be a good approach when you start creative writing in a non-native language.
Where I came from and Where I am going
Philosophy of Japanese Toilets
Subscribe