In some Japanese phrasebooks “Sayonara” is introduced as ‘Good-bye’. It is not wrong, but Sayonara is not really an everyday-used phrase for Japanese people.

When do we use ‘さよならSayonara’? 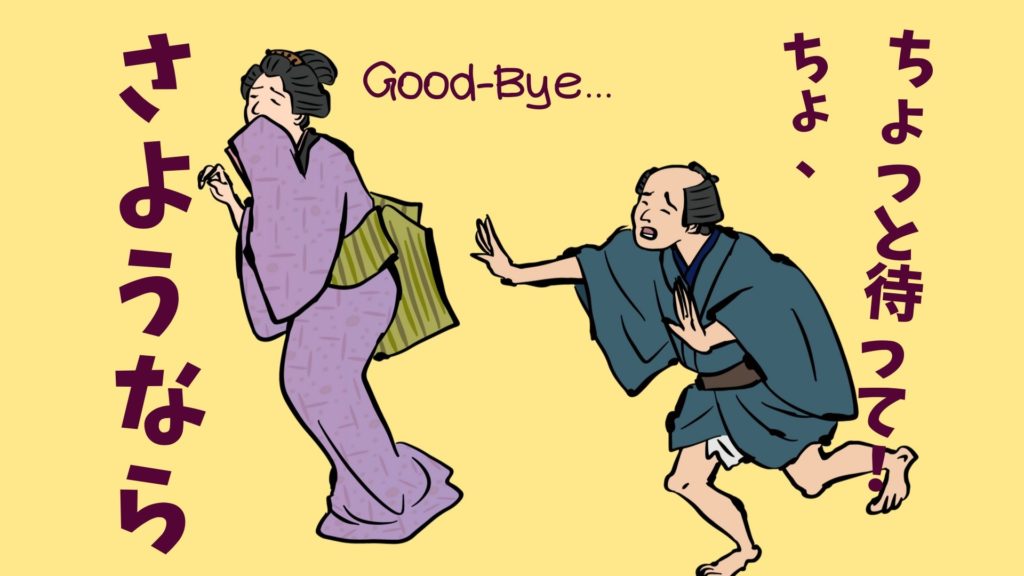 ‘さよならSayonara’ can be a ‘Good-bye’, but it is not the same as ‘See you again’ because ‘さよならSayonara’ includes a meaning, “We are not going to see each other anymore or for a while”.

‘さよならSayonara’ indicates that the separation lasts forever or for a long time. So if you want to see someone again or if you know that you will see them soon, you don’t want to say ‘さよならSayonara’.

You may say ‘Sayonara’;

You definitely don’t want to use this phrase;

What should we say when you leave someone?

When you want to tell ‘See you again’ to your family or close friend, you can say ‘またねMatane’, which sounds very casual and friendly.

Instead, you can just say “Bye-Bye” which sounds a little childish though.

When you are leaving home for work

There is a specific phrase in Japanese when you are leaving home: ‘いってきますItte-kimasu’ means “I am leaving (now).” You may have heard it on Japanese TV series or films. This is the typical word which is told towards someone’s family who will be left behind.

‘Itte-kimasu’ should be responded by ‘いってらっしゃいItte-rasshai’. These two phrases are a couple.

These are not only for your family, but also used in your company. For example, when you have a meeting in another room of the building or when you are going out for lunch, you may say ‘いってきますItte-kimasu’ to your colleagues in the office, indicating that you are leaving the office for a while. Your colleague might say ‘いってらっしゃいItte-rasshai’ as a response.

When you are leaving your office after your work

After work, you go home. Then you can say ‘お先に失礼しますOsakini Shitsurei-shimasu’, which is a polite business phrase, so you can say it to your boss as well as your colleagues. If you are talking to your close colleague you can say it in a casual way; ‘おさきにOsakini’ or ‘おさきですOsaki-desu’ as Japanese people often say.

If you are working in a shop, restaurant, hotel…

When your guests are leaving your working place, it is better not to say ‘Sayonara’, although I have been often told in Japanese restaurants or accommodations outside of Japan when I was walking away.

As a guest, I wouldn’t feel bad with ‘Sayonara’ in this situation because as long as I know they are not native Japanese. However, if it happens to me in Japan with Japanese shop attendants, I would complain because ‘さよならSayonara’ intends; “Please do not come back again.”

In that business scene, ‘またねMatane’ is too casual and not polite at all. So what should you say?

I think that the safest and easiest is just saying ‘ありがとうございますArigatou-gozaimasu’ which means ‘Thank you.’

How do you say ‘Thank You’ in Japanese? — Meaning of ‘Arigatouありがとう’ and Pronunciation
You may have heard of this phrase, "ありがとうArigatou" which means “Thank you”. It is one of the most important phrases....

What does “少し(sukoshi)” mean in Japanese?

What does ‘Kawaii’ mean?— its pronunciation and how to use