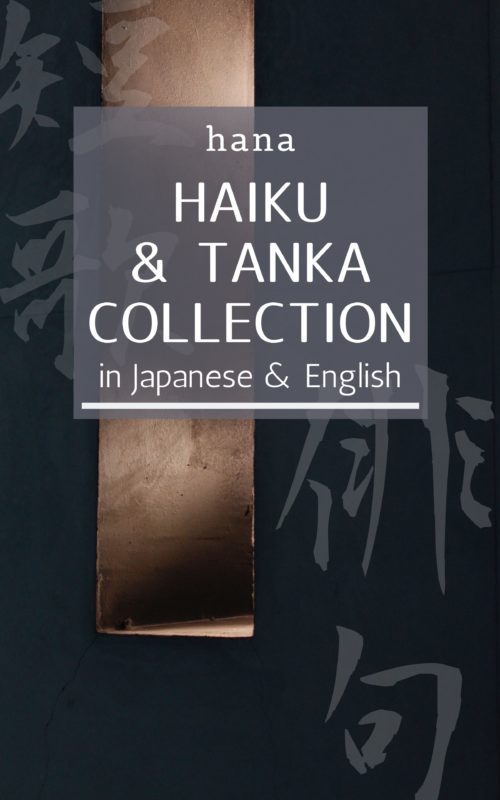 Haiku and Tanka are traditional Japanese poetry styles. Haiku poem is composed of 17 moras which are supposed to correspond to 5-7-5 syllables in three lines in English while Tanka has 31 moras or 5-7-5-7-7 syllables in five lines.

I started writing Haiku and Tanka in English a couple of months ago, even though I hadn’t practised those poetry styles in Japanese. Why I hadn’t tried them in Japanese was because there were some rules which looked complicated to me, such as seasonal words. In Japanese, you must have a seasonal word which represents the season in your Haiku piece.

We have distinctive seasons in Japan, and Japanese poets prefer to add a sense of the season in their poems because it is considered sophisticated for Japanese people to admire each season.

Although I know that the syllable structure is an important rule of Haiku poetry for English writers, I often write Haiku poems with fewer syllables than 17. It’s because I realised that 17 syllables in English could have much more content than 17 moras in Japanese. As a Japanese person, I don’t feel that I am writing Haiku poetry when I write a poem with 17 syllables in English. Assuming that Haiku poetry is a symbol of Japanese minimalism, I cannot stop feeling that 17-syllable poem in English is way too wordy compared with Japanese Haiku poems. Also, I always try to write Haiku and Tanka poetry in English and Japanese. When I write a Haiku in English with 17 syllables, it is difficult for me to translate it into Japanese with the form of 5-7-5 mora structure.

Moreover, I don’t think that it always sounds the most beautiful when you cling to the 5-7-5 syllable structure in English. Japanese and English have different phonetic systems and the rhythm of English syllables don’t work in the same way as that of the Japanese mora.

That’s why you will find 2-3-2 or 4-5-4 syllable-structured Haiku poetry in this book. I try to focus on the beauty of English sounds of poems rather than the rule of poetry style. I recommend you read my poems out loud so that you can enjoy the heart of Haiku and Tanka: the sound and rhythm.

Haiku is a symbol of Japanese minimalism. It’s like a lotus flower calmly blooming on the surface of a muddy pond, white silver rocks quietly sitting in the middle of Zen garden, or floating souls of hospitality in the air of a tiny room for the tea ceremony.

Haiku poetry is so simple that you may think it has not been completed, but the imperfection is a fun part of Haiku reading too. There is always a little room left in Haiku poetry for readers’ imagination.

In this book, I selected some of the best Haiku and Tanka poems which I have written. This book is just a milestone of my Haiku poetry journey and I hope you can glance at the atmosphere of Japanese Haiku and Tanka world.

—–quote from the “Introduction”—–

You always forget what you have in your pockets

the Essence of Haiku poetry and my favourite Japanese Haiku poems

A romantic Tanka by the 75th Japanese Emperor: Se wo hayami Iwani sekaruru…

After the 100 Haiku Writing Project

snowshoes — a Haiku
A winter draft – a Haiku
insomnia snow不眠の雪 – a Tanka Poem
An early spring Tanka by Emperor Koukou: Kimiga tame Haru no noni idete…
the Essence of Haiku poetry and my favourite Japanese Haiku poems
A Gecko
A summer Haiku by Basho: Samidare wo…
Hurry up to see her before my mum’s gone: Michinoku no Hahano inochi…
A frozen forest — a Haiku
A white skull
Subscribe